You are here: Home / misc / Photo Tip: What NOT to do to avoid blinking in pictures

As a Sydney Eastern Suburbs Family Photographer a lot of people ask me about blinking when taking photos of their kids or family. There are lots of tips out there on how to avoid blinking in pictures. Some of them work, some not so much. Here are a few ‘tips’ that in our experience are not useful to avoid blinking in pictures. In our next article we’ll give you some easy to use tips that we’ve found to work well.

Turn off the flash

This sounds obvious but is obviously wrong. As the photographer if you’ve decided the situation calls for a flash, then turning it off just causes other problems, such as giving your photographs with motion blur. Blinking isn’t hard to avoid, as we’ll see later. It’s not worth converting it to a different problem.

What’s more it might not be the flash at all. A lot of people react to the sound of the mirror going up and will blink even when flash is not being used.

This firstly doesn’t work on babies who don’t understand, and secondly doesn’t work on young kids who will be contrary and keep their eyes closed as a game! Thirdly even in willing participants, people open their eyes at different rates and you’ll most likely catch some people halfway opening their eyes while others have already started to blink again!

Another problem is that if they are indoors, the dark will cause their pupils will dilate which makes them more susceptible to to blinking when they finally open their eyes.

I’m not sure what the theory is, do people have a preset number of blinks, so by using them all up you won’t blink in the photo? I don’t think that’s how it works. There’s the argument that it helps lubricate their eyes, but if they were relaxed their eyes wouldn’t be dry in the first place.

And when this does work, what you end up with is a hard stare into the camera that looks stiff and unnatural.

Just keep going, they’ll get used to the flash and blink less

OK this may work by accident eventually, but it’s not really something you want to subject your kids to. Most people will start to get restless and you’ll end up with some bored looks that you don’t want.

There are pages and pages of tips out there about blinking. A lot of ineffective stuff gets repeated a lot until it sounds like it will work – but it won’t. So what do you do? Stay tuned for our next article where we will share the only two things you need to do to avoid blinking in your photographs.

Valent Lau Photography provides Children and Family Photography and is based in South Coogee in Sydney’s Eastern Suburbs. Contact us now and take your first step towards creating some beautiful heirlooms. 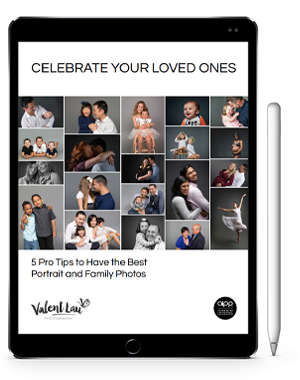 Get 5 Pro Tips to Have the Best Portrait and Family Photos Ever!

Time goes so fast, and you don’t want to miss a single gorgeous moment… Get this free booklet with tips on how to have a meaningful time and get amazing photos, guaranteed!